The placement and conceptual design of routes & holds relies primarily on the input/contributions of operational team members (e.g. controllers and airspace users) supported by airspace and/or procedurer designers.  This activity has several iterations with Activities 8 & 9.

The conceptual design of traffic flows (which ultimately become the future the SIDs/STARs and ATS Routes) is the starting point of this exercise. This is an analytical & iterative process (which, in its simplest form, can be done with just paper and pencil). Route placement is usually determined by the traffic demand, runways in use and strategic objectives – and, to a greater or lesser extent, the airspace reservations and their flexibility.  Route spacing is determined by the operational requirements and the navigation approvals of the aircraft fleet determined in Activity 6 (Tab 1).

For example:  if a 10-15 NM route spacing is intended in an en route airspace where Radar surveillance is provided, this has only been found to be viable in European airspace if the fleet is approved to RNAV 5 as determined during Activity 6. As such, the intended route spacing and CNS infrastructure indicate that PBN (in this case an RNAV 5 specification) is needed. However, if a closer route spacing, in the order of 7 NM, is required and the fleet needs to be Advanced RNP equipped but the fleet does not have this capability, then it becomes necessary to decide whether to mandate A-RNP carriage or whether to widen the route spacing associated with a less demanding navigation specification.

One of the greatest advantages of PBN is that ATS Routes, SID/STARs and instrument approach procedures do not have to pass directly over ground-based NAVAIDs. PBN makes it possible to place routes in the most optimum locations provided the necessary NAVAID coverage is provided by the ground and/or space-based facilities. This ‘placement’ benefit provides huge advantages. It means that routes can be placed where they give flight efficiency benefits by, for example, avoiding conflicts between flows of traffic. Similarly, routes can be designed to provide shorter track miles or vertical windows at crossing points supporting continuous descent or climb operations enabling more fuel efficient profiles with reduced environmental impact (noise CO2 etc). It also means that parallel routes can be designed to avoid having bi-directional traffic on the same route and to provide various route options between same origin and destination airports. Most significantly, perhaps, this placement benefit provided by PBN makes it possible to ensure the efficient connectivity between en route and terminal routes so as to provide a seamless (vertical) continuum of routes.

Key to obtaining these advantages (particularly in a terminal airspace) is the need for arrival and departure routes (STARs/IFPs and SIDs) to be designed as a function of the interaction between them as well as servicing the traffic’s desired track and ensuring obstacle clearance. Route placement for PBN does not negate best practices in route design developed over decades. Some of these considerations are captured in the Tabs below.

The development of the Free Route concept and its perceived flexibility has led to a ‘mandate’ on the implementation of Free Routes Airspace (FRA) in ATM Functionality #3 of the PCP Implementing Regulation.  The target date for full implementation is January 2022.   A key difference between ATS Routes and Free Routes is that fixed ATS Routes which are published in the AIP are designated using conventions prescribed in ICAO Annex 11, Appendix 1 e.g. UL611. This is not the case for a free routes which may or may not be published in the AIP. In the European continental application of free routes, some of these routes are published as DCTs (directs) between two waypoints in the AIP and other routes may be published in the Route Adherence Document (RAD).

Published ATS Route networks are planned at continental, regional or area level as appropriate. The introduction of PBN means that the more widespread the planning for the use of a common navigation specification as a basis of the network's design, the more seamless the interface between different areas can be because the route spacing would not be altered; connectivity is key. PBN does not change general good practice that uni-directional routes are better than bi-directional routes, from an ATM perspective. A parallel system of PBN ATS routes across a continent can provide great benefits in that it is possible to segregate traffic or balance traffic loads on different routes. When creating a parallel route system, care must be taken where the ATC sector lines are drawn when it comes to balancing the ATC workload. In generic European RNAV and RNP route spacing studies, the assumption is made that the parallel routes are contained in the sector of a single controller i.e. the ATC sector line is not drawn between the two routes.  This means that if it became necessary to draw a sector line between the parallel routes in order to control ATC workload, the implementation safety assessment would have to address this reality and it may prove necessary to increase the spacing between the two routes. More detailed information on PBN Route Spacing between published ATS Routes is provided in the 'European PBN Route Spacing Handbook' (EUROCONTROL PBN Handbook 3, 2019).

Continental traffic flows which service multiple origin and destination airports are best segregated where possible from the terminal routes to/from airports. This is to avoid mixing overflying traffic with climbing and descending traffic or fixed en route ATS routes and/or free route trajectories. 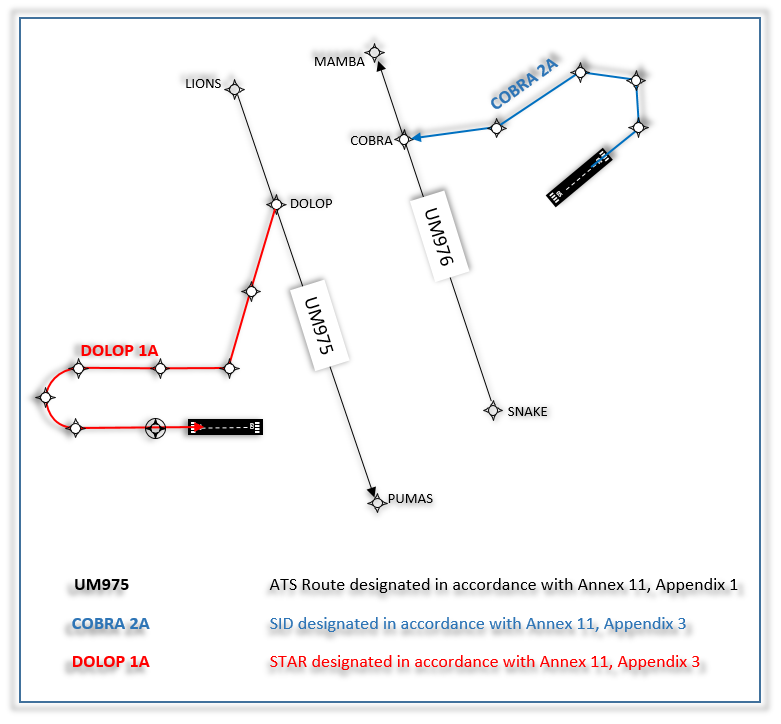 Whilst operators, environmental managers and procedure designers consider the placement of each SID/STAR and IAP in terms of flight efficiency, environmental mitigation and safety (obstacle clearance/flyability), ATC has to manage all traffic along the routes as a package. As such, the airspace design from an ATC perspective, needs to address the interaction between arrival and departure flows of STARs/IAPs and SIDs. Different objectives such as flight efficiency, environmental mitigation, safety and air traffic management are not mutually exclusive. It is possible to design terminal routes and achieve most of the (apparently conflicting) objectives. Optimally the arrival and departure flows would be segregated laterally to allow an unconflicted vertical path from both flows.  However, whilst this might be possible in a very low traffic density environment, the reality is that routes must cross and this will need to be coordinated by ATC.

Therefore, care must be taken in choosing the crossing points between departure and arrival routes. The crossing point of SIDs and STARs should not constrain arriving or departing aircraft (hence, knowledge of aircraft performance is essential). The Vertical Interaction tool allows the user to put in specific climb and descent gradients.  The Vertical Interaction tool shows all departure climb gradients in Blue and distance from T/O along the bottom X axis.  Arrival descent paths are shown in Red and distance to touchdown indicated along the top access.  Therefore, by setting climb and descent gradients and the distance of the crossing point from the T/O point (in blue) and the touchdown point (in red), the tool will calculate the expected vertical separation of the two flows at that point.  Whilst the Vertical Interaction tool is not a procedure design tool, it will provide a good indication of the vertical interaction at the crossing.  Two simple mantras can be considered when looking at crossing points:

The procedure designer along with operational pilots provide most of the aircraft performance data to the airspace design team. With PBN, some navigation specifications provide extra confidence in the vertical as well as the lateral planes and the use of these additional requirements can be of benefit in the airspace design.

There tend to be two predominant ‘models’ used in the design of busy terminal airspaces with ATS surveillance.

The first can be compared to a pressure cooker where a number of strategic holding patterns are spread geographically at a similar distance from the landing runway (nominally, at four ‘entry points’ to the terminal area). As the traffic increases, these holding patterns are stacked keeping the pressure on the terminal airspace and allowing ATC to feed a continuous stream of arriving traffic from the holding stacks to the arrival/approach system with departures threaded through the arriving traffic.

The second model is more ‘elastic’ in that, in order to avoid holding aircraft, (sometimes extensively) longer terminal arrival routes are designed to the landing runway.

Sometimes a third model is used which is a hybrid of these two.

The advantages and disadvantages of each system can be extensively debated. Some contend that in the end the track miles flown by arriving aircraft are more or less the same irrespective of the model used, which may be true in given circumstances.  However, when aiming to facilitate continuous descent, linear extensions on extended routing may provide the pilot with greater ability to plan the descent profile and hence provide benefits over holding, especially at lower altitudes.

Although ‘Open’ or “Closed’ arrival procedures are not ICAO expressions, they are increasingly in common use. PBN makes it possible to design closed or open procedures. The choice of open or closed procedure needs to take account of the actual operating environment and must take into account ATC procedures.

Open procedures provide track guidance (usually) to a downwind track position from which the aircraft is tactically guided by ATC to intercept the final approach track. An Open procedure will require tactical vectoring instructions to align the aircraft with the final approach track. This results in the RNAV system only being able to calculate the descent up to the final waypoint on the procedure; at this point the computer is coded to fly the last heading and height and await for manual intervention – this is a path terminator called ‘Heading to Manual Termination’ (VM). This means that a continuous descent operation after this point may not be possible, due to the uncertainty of path stretching which ATC may use.  There is a possibility for ATC to give distance to go as a tactical enabler for CDO but this is not commonly practiced in busy TMAs.

Closed procedures provide track guidance right up to the final approach track whereupon the aircraft usually intercepts the ILS. The Closed procedure provides the pilot with a defined distance to touch down thus supporting the area navigation system’s execution of the vertical profile. Where multiple arrival routes are operated onto a single runway, the closed procedure can result in a safety hazard should ATC not be able to intervene to prevent the automatic turn onto final approach towards other traffic. Significantly, however, Closed procedures can be designed and published in a manner that anticipates alternative routeing to be given by ATC on a tactical basis. These tactical changes may be facilitated by the provision of additional waypoints allowing ATC to provide path stretching or reduction by the use of instructions ‘direct to a way-point’. However, these tactical changes, needed to maximise runway capacity, do impact on the vertical profile planned by the area navigation system. 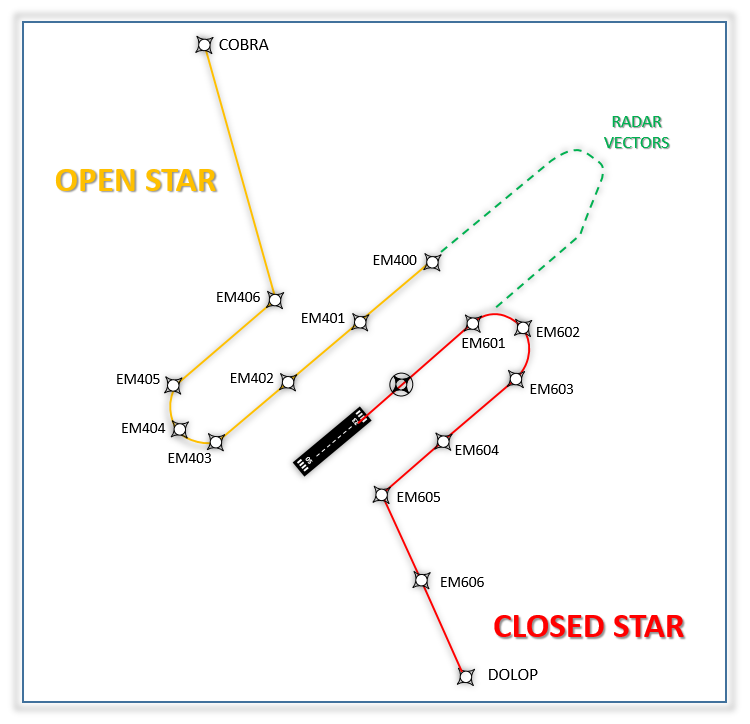