Error sources for an Inertial System

Error sources for an Inertial System 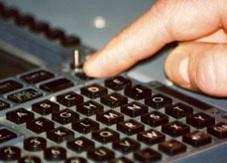 Many factors contribute to errors in an inertial navigation system. In-flight errors arise from imperfections in gyros, accelerometers and computers. Initial misalignment may cause additional errors.

The most common error that occurs with any inertial system is Human Error.  If the pilot fails to input the correct data then the information the inertial gives out will be wrong: "Rubbish in ...Rubbish out"

The INS platform is held in alignment by gyroscopes and gyros have two important properties:

A spinning gyroscope should always point in the same direction because of rigidity. However, if you monitor a gyroscope for a period of time you will observe that the spin axis drifts away from the direction in which it was originally pointing.  This movement is called wander. There are two types of wander:

Real Wander. Caused by mechanical errors normally in the manufacturing stage such as the gyro not being perfectly balanced and friction at the gimbals.  These factors cause precession and the spin axis moves.  Real wander can be reduced, but not completely removed, by improved manufacturing tolerances.