An Inertial Navigation System has several advantages over other navigational systems.

It does not require any external information, so it can provide navigational information when no NAVAID signals are being received.

It provides both POSITION and ATTITUDE information.  Given accurate data, an INS can give precise bearing and range to Way Points and Destinations.

An inertial platform continually measures the accelerations of the aircraft in the North/South and the East/West axes. The INS calculates velocities from the measured accelerations. Track and Groundspeed can be obtained from these velocities. Distance travelled by the aircraft in the North/South and East/West axes is calculated from the velocities. If an accurate position is inserted into the INS before the aircraft taxis, then a continuous readout of position can be obtained.

An INS is a completely self-contained system and independent of ground based navigation aids.  Once it has been supplied with initial, correct, position information, it is capable of providing an accurate display of position, attitude, and heading. It can calculate the track and distance between two points, display cross error, provide ETAs, ground speed and wind information. It can also provide guidance and steering information for the pilot instruments.

The system consists of the inertial platform, interior accelerometers and a computer. The platform, which senses the movement of the aircraft over the ground, contains two gyroscopes. These maintain their orientation in space while the accelerometers sense all direction changes and rate of movement.

The information from the accelerometers and gyroscopes is sent to the computer, which corrects the track to allow for such factors as the rotation of the earth, the drift of the aircraft, speed, and rate of turn. The aircraft's attitude instruments may also be linked to the inertial platform.

The accuracy of the INS is dependent on the accuracy of the initial position information programmed into the system. Therefore, system alignment before flight is very important. Accuracy is very high initially following alignment, and decays with time at the rate of about 1-2 NM per hour. Position updates can be accomplished in flight using ground-based references with manual input or by automatic update using multiple DME or GPS inputs. 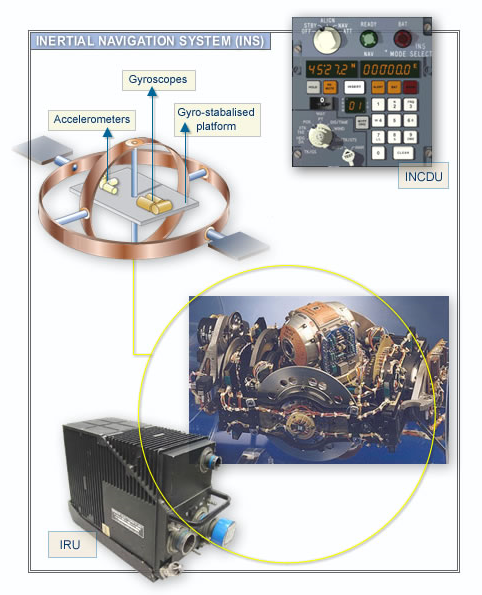 By using three ring laser gyros (RLG*) and three accelerometers placed at right angles, it is possible to interpret all movement of the aircraft in space. This type of system has no moving parts and makes it ideal for "strapdown" inertial systems. A strapdown INS is one that is "hard mounted" to the aircraft. There is no need for a stabilised platform such as that utilised in a conventional INS.

*RLG: The ring laser gyro is a triangle shaped device with a silicone body and a gas filled cavity. A cathode and two anodes are used to excite the gas and produce two laser beams travelling in opposite directions. Reflectors in each corner are used to reflect the lasers around the unit's body. If the two laser beams travel the same distance, there will be no change in their frequency. However, if the unit is moved (accelerated), one light beam will travel a greater distance to the detector than the other beam. The beam travelling the greater distance will have a lower frequency than the beam travelling the shorter distance. The detector analyses these frequency changes and sends the information to the computer, which then translates the data into movement in space.