The Global Navigation Satellite System consists of one or more core constellation(s) and then set of possible augmentations.

GNSS is a worldwide position and time determination system that includes one or more satellite constellations, aircraft receivers, and system integrity monitoring, augmented as necessary to support PBN for the actual phase of operation.

The satellite navigation systems in operation are the Global Positioning System (GPS) of the United States and the global (orbiting) navigation satellite system GLONASS of the Russian Federation. Both systems were offered to ICAO as a means to support the evolutionary development of GNSS.

In 1994 the lCAO Council accepted the United States offer of the GPS, and in 1996, it accepted the Russian Federation offer of GLONASS.

To overcome inherent system limitations of GPS and GLONASS and to meet the performance requirements (accuracy, integrity, continuity and availability) for all phases of flight, both satellite systems require varying degrees of augmentation. GNSS Augmentations are classified in three broad categories: aircraft-based, satellite-based and ground-based.

The most basic type of aircraft-based augmentation (ABAS) is called receiver autonomous integrity monitoring (RAIM).  RAIM is an algorithm in the receiver.  RAIM is enabled if there are more than four satellites with suitable geometry in view.  To compute a 3D position estimation 4 satellites are required.  Therefore, if a fifth satellite was to be in view, 5 independent positions could be computed.

If these position estimations do not fall within a specified margin, it can be deduced that one (or more) of the satellites are transmitting erroneous information. This is known as Fault Detection (FD).  If there are six or more satellites in view, more independent position estimations can be calculated and a receiver may then be able to identify the one faulty satellite and exclude it from the position determination calculations.  This is referred to as Fault Detection and Exclusion (FDE).

Aircraft-based augmentations also include more complex integration of a receiver into the aircraft avionics.  These are generally termed aircraft autonomous integrity monitoring (AAIM). An inertial navigation system, for example, can aid GNSS during short periods when the satellite navigation antennas are shadowed by the aircraft during manoeuvres or during periods when insufficient satellites are in view. Integrity of the position estimation can be monitored by comparing the inertial position against the derived GPS position. Furthermore, augmentation techniques can improve availability of the navigation function by providing altimetry-aiding, more accurate time sources or some combination of sensor inputs combined through Kalman filtering techniques.

RAIM is the most common form of integrity monitoring.  Most Navigation Specifications will have specific requirements for the flight crew to check that there will be sufficient satellites to enable the algorith to provide integrity monitoring; this is known as RAIM prediction.  The States' AIPs will lay down what RAIM prediction check will be required for the operation. 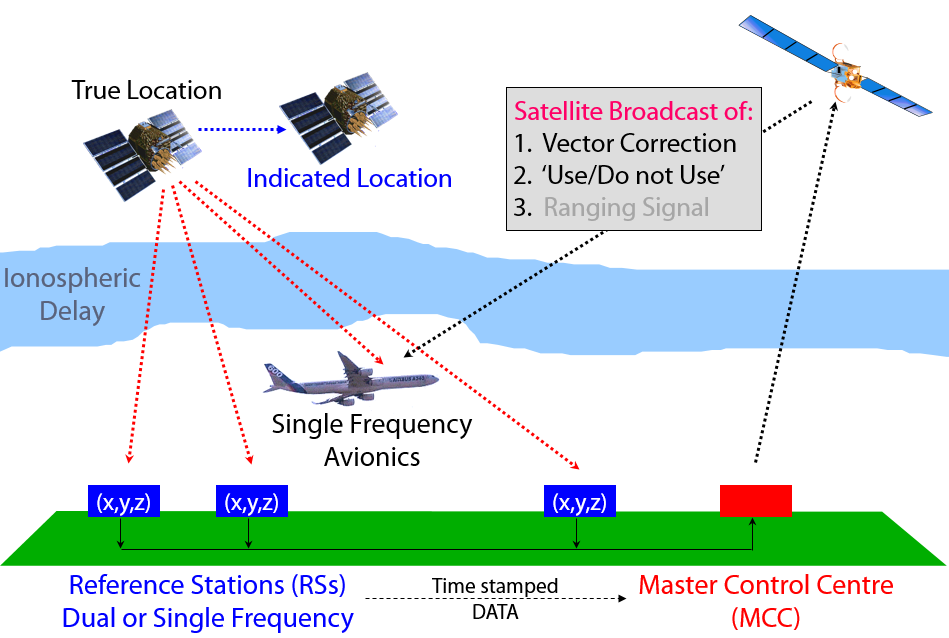 To provide improved positional accuracy and integrity monitoring of the ‘core constellations’ independent civilian systems have been developed.  To cover a regional size area, a Geostationary satellite is used to transmit augmentation data to the end users.  These GEOs transmit their information on the L1 frequency, however a specific SBAS receiver is required to read the information.; these receivers are referred to as ETSO 145C (integrated) or ETSO 146C (stand-alone).  All SBAS systems monitor and provide corrections for GPS.  Only the Russian Federation's System for Differential Corrections and Monitoring (SDCM) also monitors and provides corrections for GLONASS.

SBAS systems are regional mirror images of the ground segment of GPS, with monitoring stations receiving GPS data, time stamping it and sending to a Master Control Centre (or Station) for processing.  The MCC will calculate corrections for the satellites in view and if those correction are too gross, the system will declare that satellite as ‘Do Not Use’.  The correction data together with a Use/Do Not Use flag is then put on a GPS look-a-like signal uplinked to the GEO and immediately rebroadcast down to the end users.  Provided the end user has a SBAS receiver, then he/she will have a more accurate position estimation (+/- 3 m horizontally, +/- 5 m vertically) together with an integrity on that position estimation of 10-7.

This level of performance means that SBAS can support most phases of flight.  ICAO has recognised that in the approach phase of flight, SBAS provides as good a service as ILS down to CAT I performance and within Annex 10 Vol I there are provisions for both Localizer Performance with Vertical guidance (LPV) and SBAS CAT I.  There are however certain limitations with an SBAS service as the GEOs are orbiting on the Equatorial plane and at the very high latitudes and in the deep East-West valleys of mountainous terrain, the SBAS signal may not be visible; similarly when manoeuvring the signal could also be masked.

It is important to note that SBAS is not widely deployed in commercial air transport.

For more information on the European SBAS system, click below: 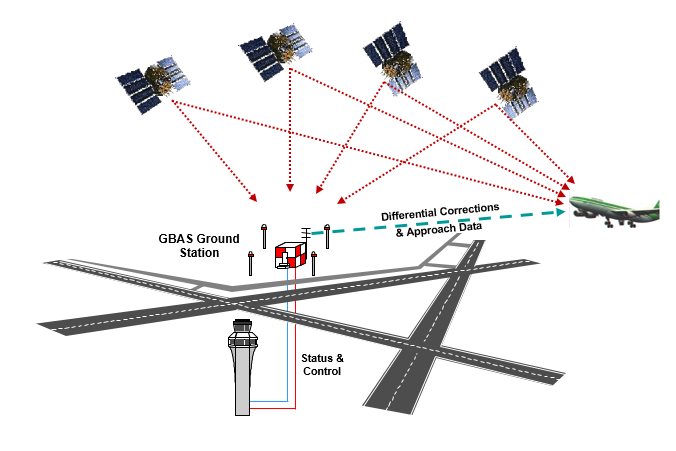 Ground-based augmentation is a local area system which provides a ranging correction for each satellite in view, this improves on the accuracy of the position estimation.  Like SBAS, when the correction becomes unreliable, that particular satellite is declared as ‘Do Not Use’.  GBAS provides integrity commensurate with CAT I or CAT III operations with a metric level of accuracy both horizontally and vertically.  The operating principle of GBAS is different to SBAS as all the satellite measurements are taken close to an aerodrome and the assumption is that the error at the ground station and the error at the aircraft is the same.  The further the aircraft is away from the ground station the less likely the errors are the same.  Therefore, GBAS has a nominal range of 23 NM but some current implementations have service volumes up to 200 NM.

GBAS was developed as a Precision Approach system is currently used operationally as a CAT I system; standards for CAT II/III have been published in Nov 2018 and first implementations are on-going.

For each satellite in view to the ground system, and this information is then broadcast over a VHF data link.

GBAS is a Precision Approach system; however, it can also be used as a position sensor for PBN operations.  However, PBN is being very effectively used to deliver aircraft onto precision approach.  This is commonly referred to as RNP to xLS; xLS means one of either an ILS, MLS or GLS.  In future, other systems may be integrated into the xLS terminology.